For some time we have been eating mostly grain free.  My husband has a gluten intolerance which means, of course, that we have to avoid all sources of wheat and wheat-like grains.  I have mild arthritis which feels much better when I avoid all grains.   In order to simplify cooking, we mostly just avoid grains altogether.  Recently I bought copies of "Well Fed" and "Well Fed 2" by Melissa Joulwan.  These are Paleo cookbooks, but I was immediately drawn to the recipes because of the emphasis on fresh ingredients, prepared with imagination. The recipes are presented in an easy to use format and it was here that I first came across "cauliflower rice".  Now I love cauliflower but it is not something the rest of my family enjoy so I thought I would give this a go and try it out on them.  The first time I made it I made the recipe exactly but I didn't mention what it was when I served it.  I just put a beautiful big bowl of it on the table with the other dishes.  Half way through his second helping my husband asked if he was eating couscous!  (remember he can't have gluten!)  My daughter had enjoyed it and thought that the shredded carrot was cheese!  They were pretty surprised to learn it was cauliflower!  Now I make my own version.  When I made it last week, we had it with grilled steak.

I start with a whole large cauliflower.  I like the green ones because of the color but this works with any cauliflower.  Break it up into florets and discard the hard center stem.  Pulse in the food processor for about 14 pulses till it looks like grains. 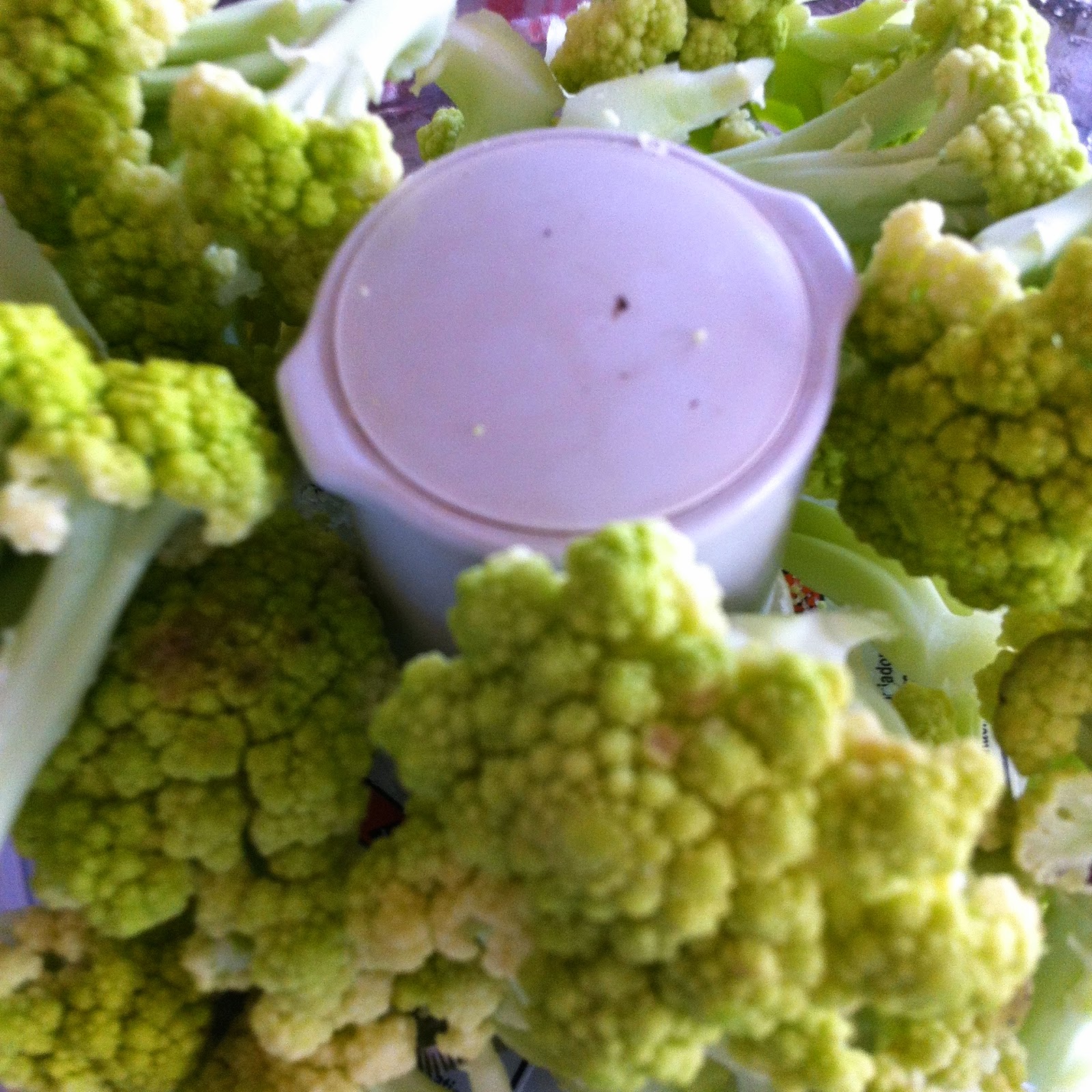 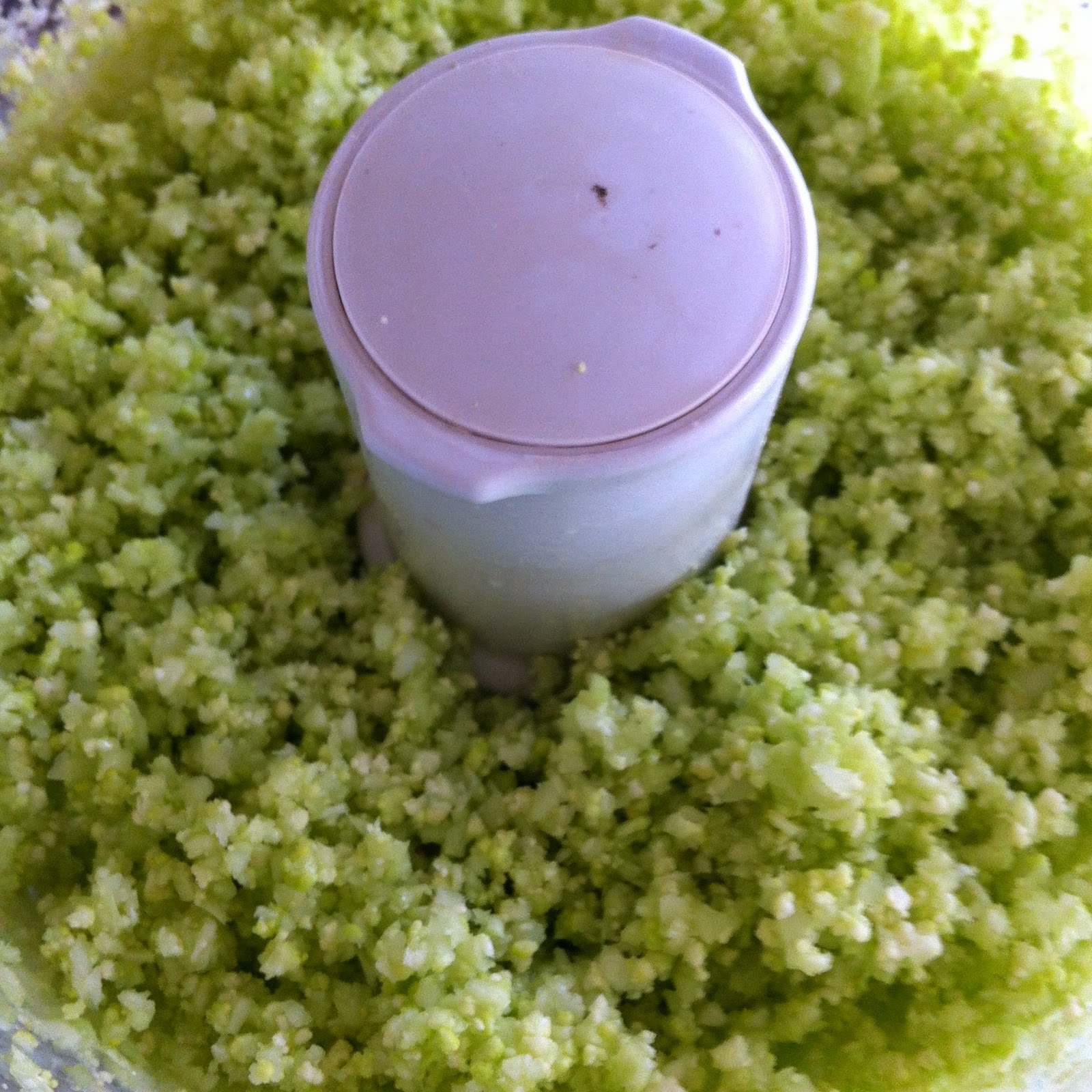 Do this with the whole cauliflower and put it in a bowl.  Coarsely chop one small red onion, a carrot, a red bell pepper, as much garlic as you like (I use at least 3 cloves)  and a chili pepper.  Next chop a seriously large handful of herbs.  I use what I have growing in the garden, chives, parsley and lots of cilantro.  Heat some coconut oil or other oil in a pan and sauté the onion, carrot, peppers and garlic till softened and the onions start to brown. 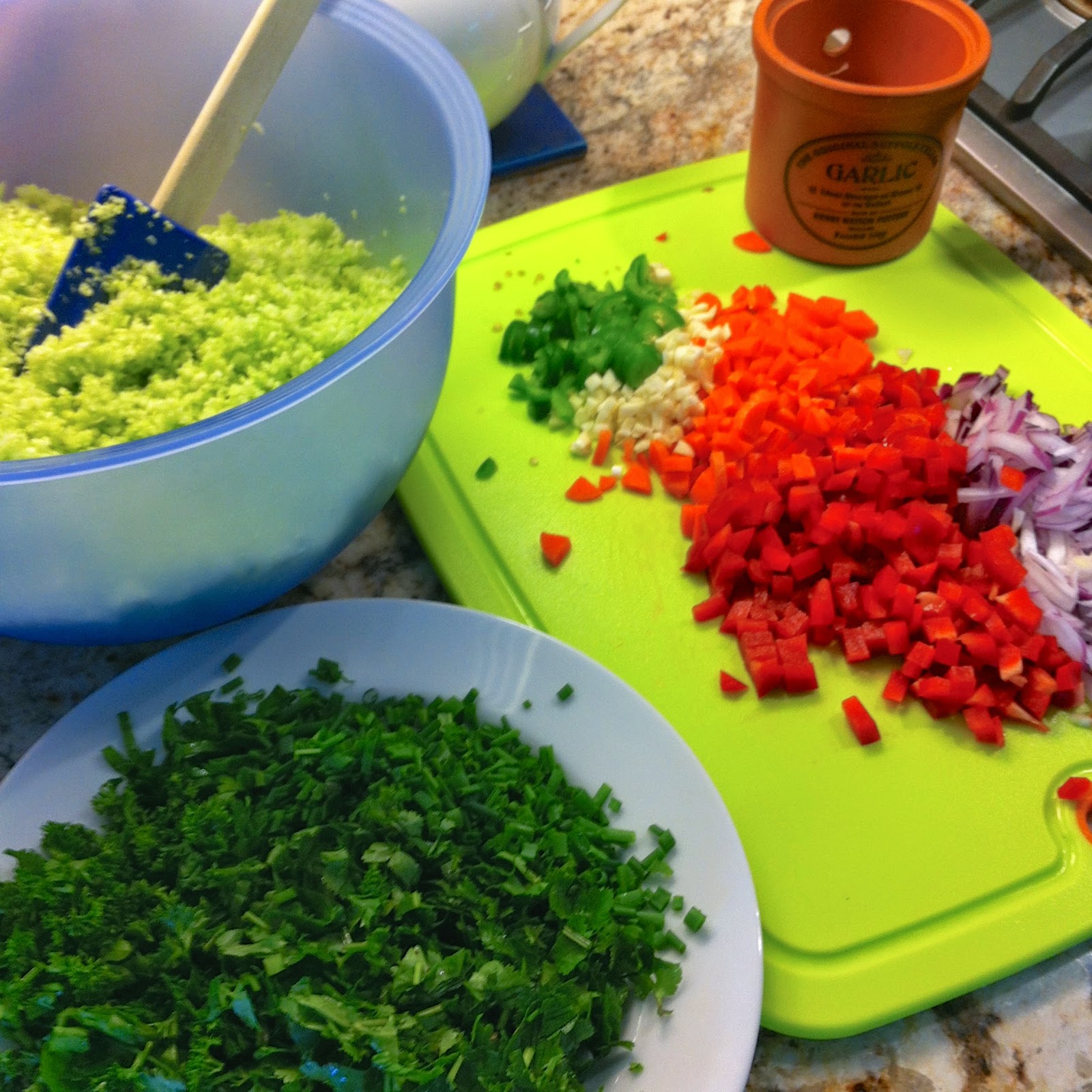 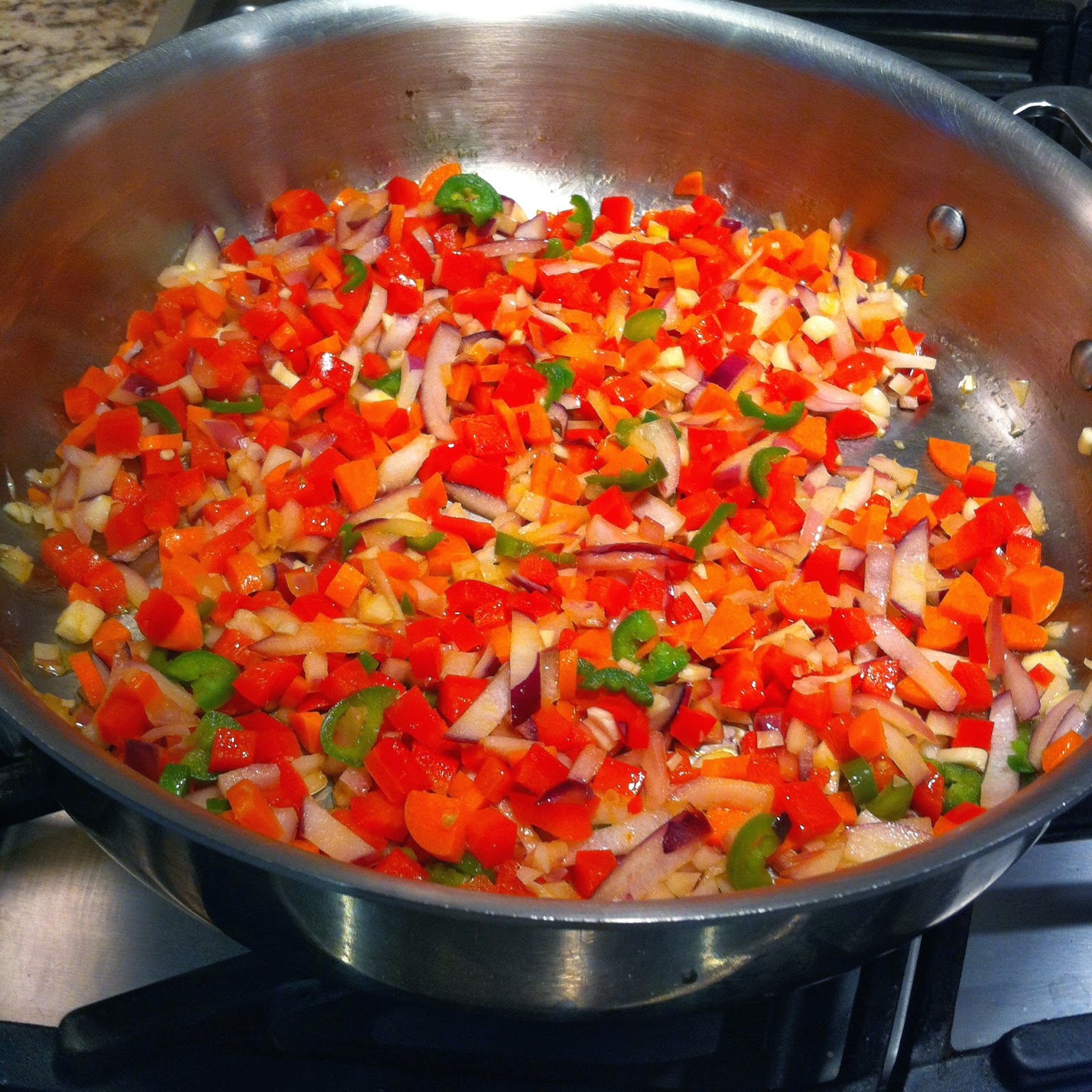 Now add the cauliflower and mix to combine all the vegetables and oil.  Don't add salt at this point, you don't want to draw the moisture out of the vegetables.  Stir frequently over medium flame for about 10 minutes.  Really you have to taste it to see if it is done.  It should have some tooth to it, like rice does.  Season with salt and pepper.  At this point I add the herbs, a generous handful of cashews or toasted almonds and a handful of raisins or dried cranberries.  Just stir everything around until evenly mixed, taste and add more salt if necessary.  Don't be afraid of adding lots of herbs, garlic and salt, the cauliflower can take it! 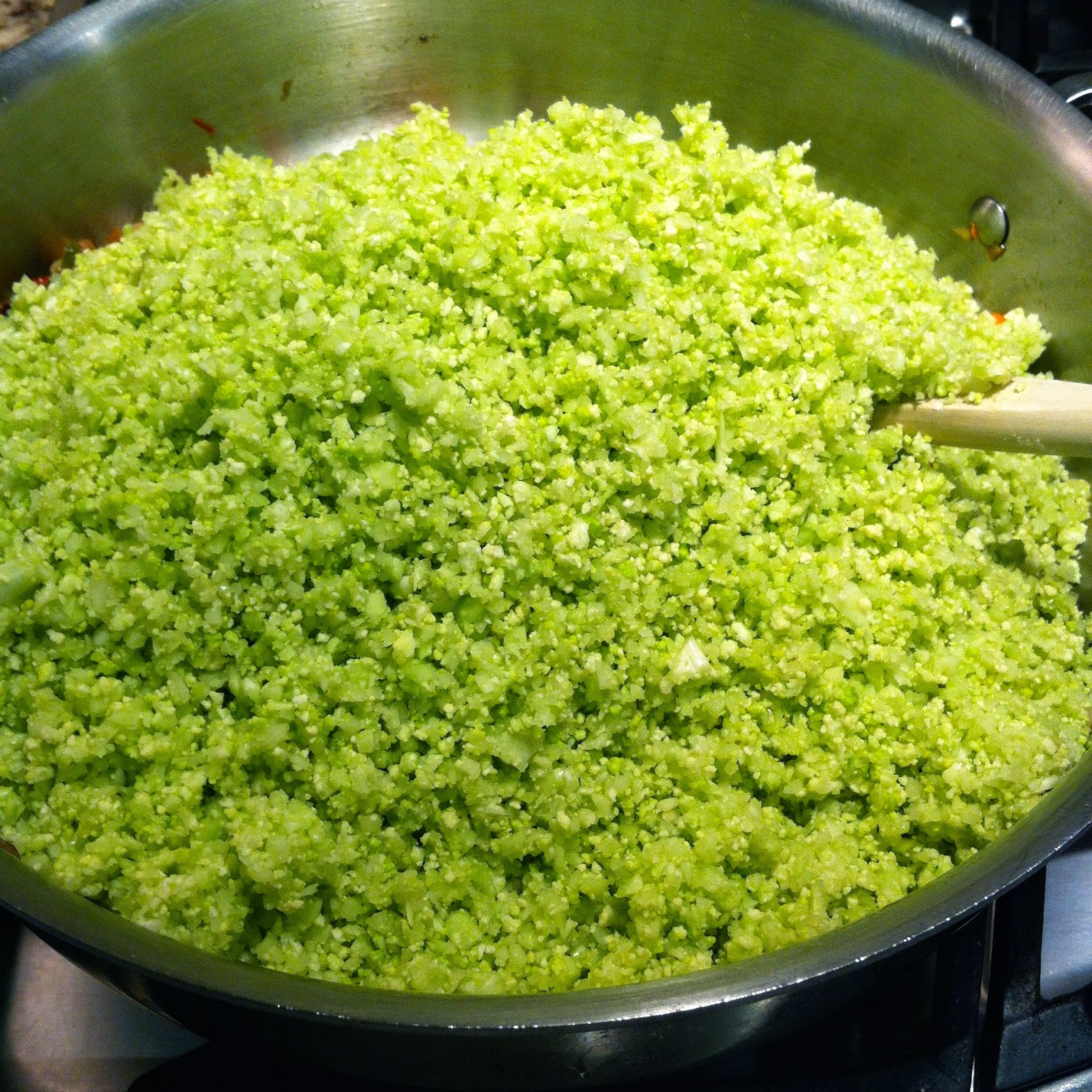 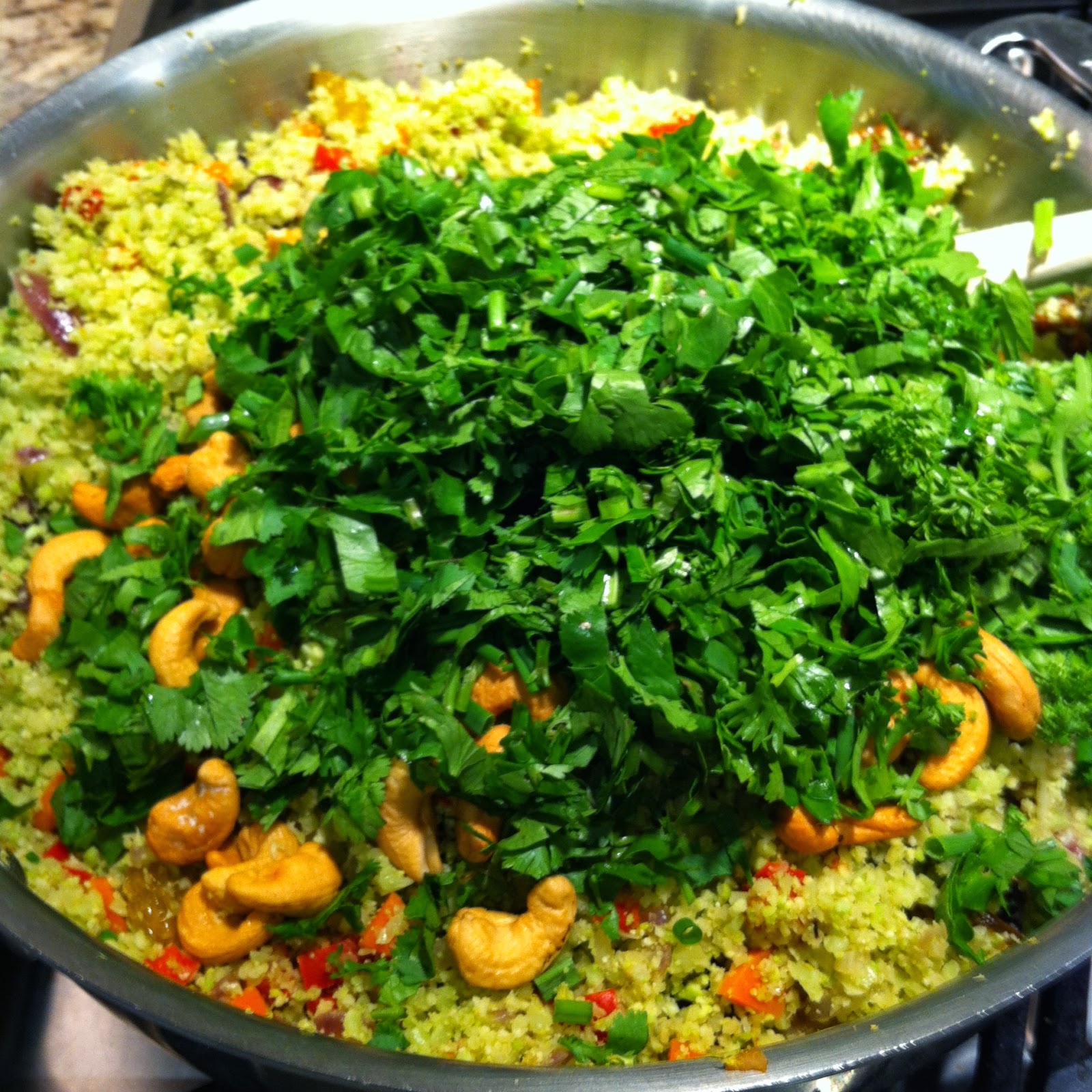 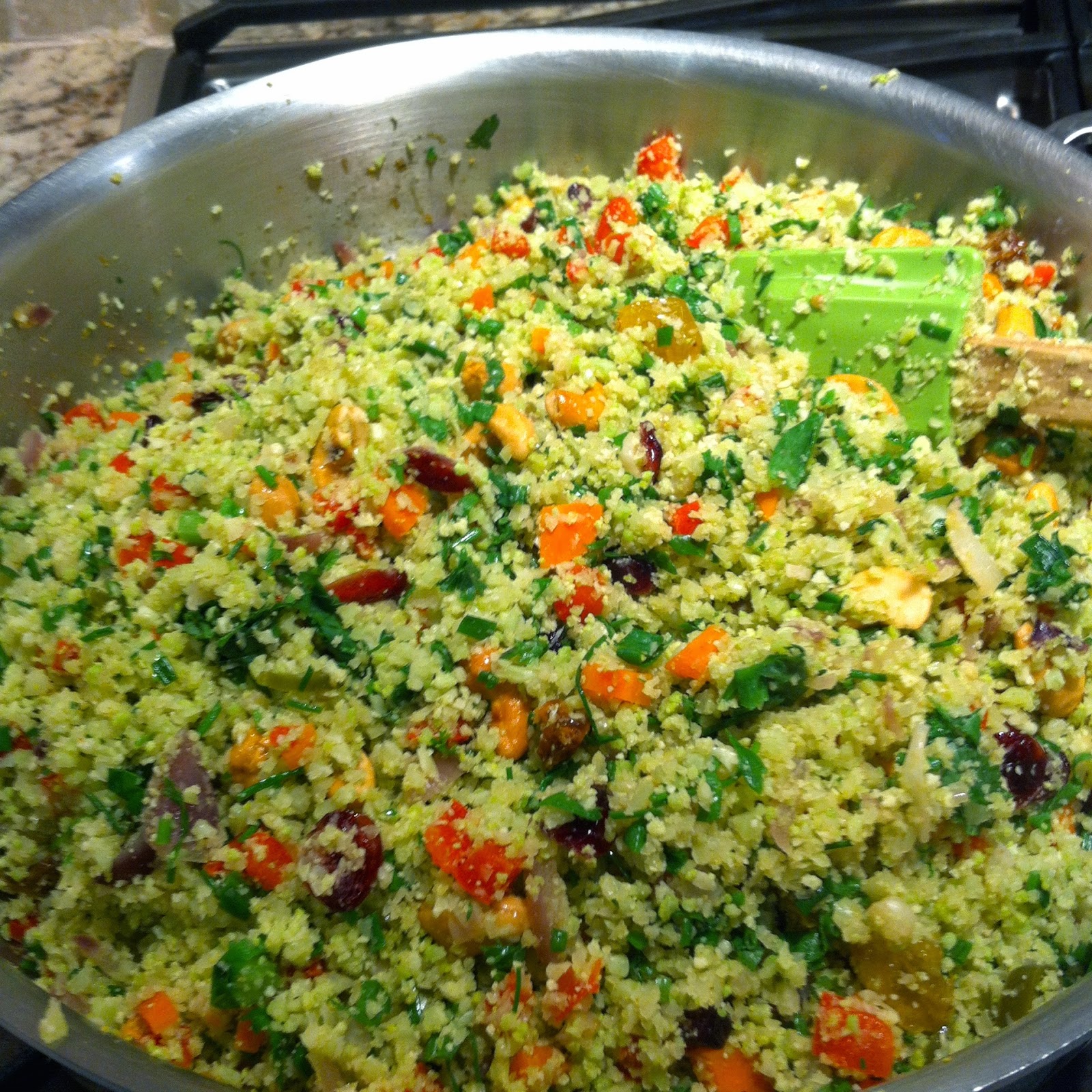 Posted by angele carter at 4:23 PM