September 06, 2014
I've sold a couple of cherry blossom pincushions recently so I felt like I needed to make some more, especially with the quilt show coming up at the end of this month.  You can see from the photos that each is slightly different as I cut the trees freehand.  I found myself sewing all around town this week while waiting in the car for various things my daughter had going on.  Good thing it's such a portable project!  I love this pincushion design.  I really enjoy doing french knots, they are my favorite stitch and I am really happy with the soft color palette. 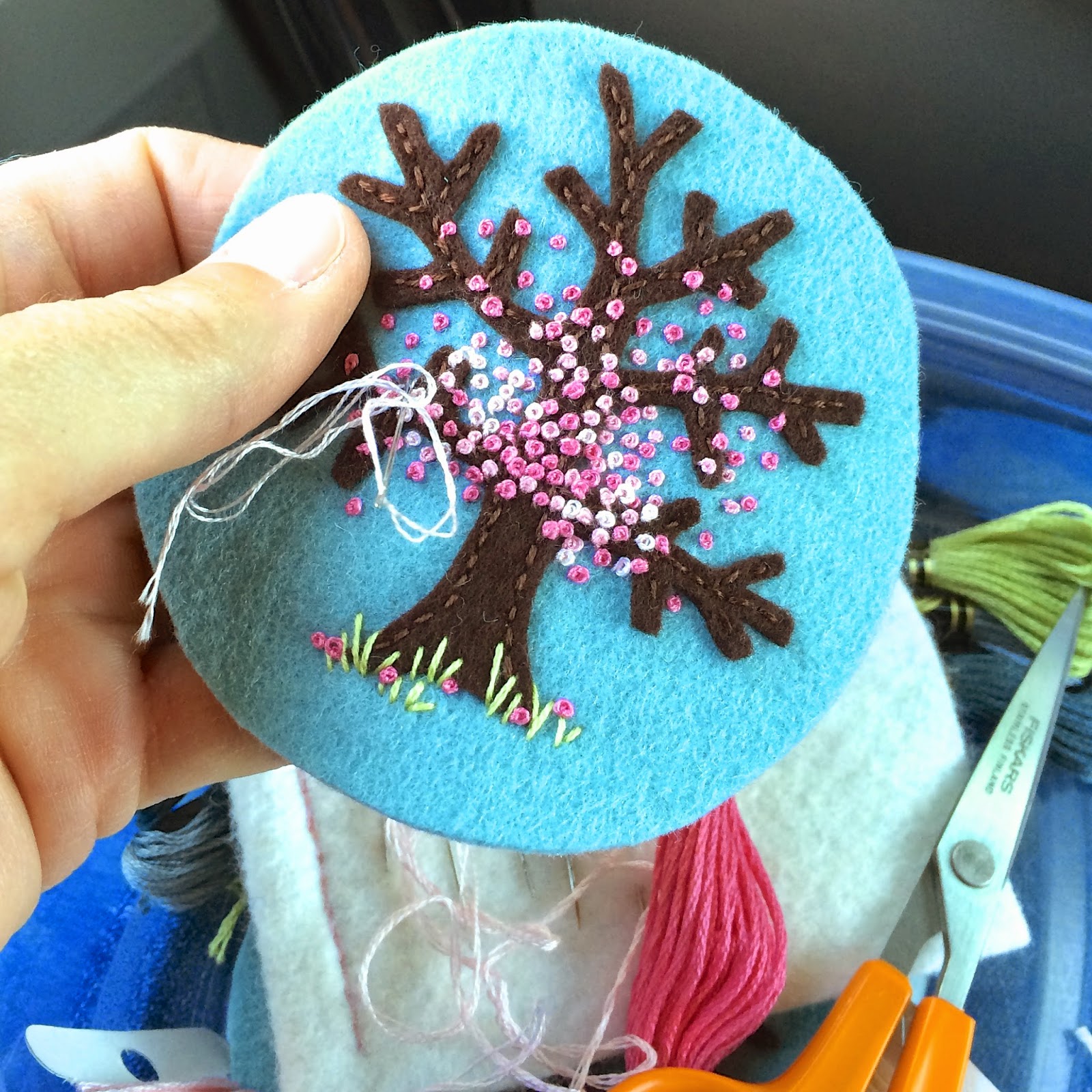 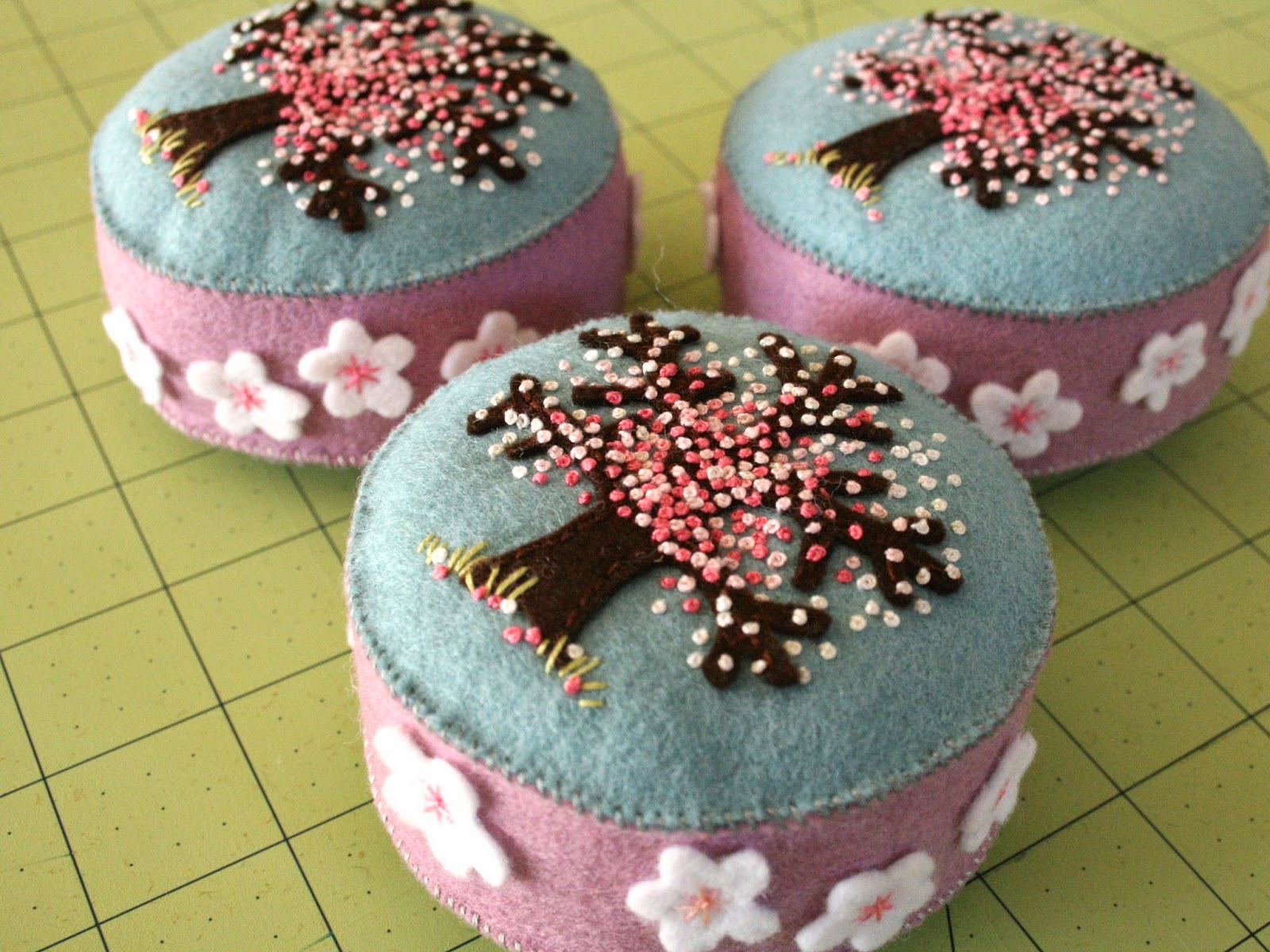 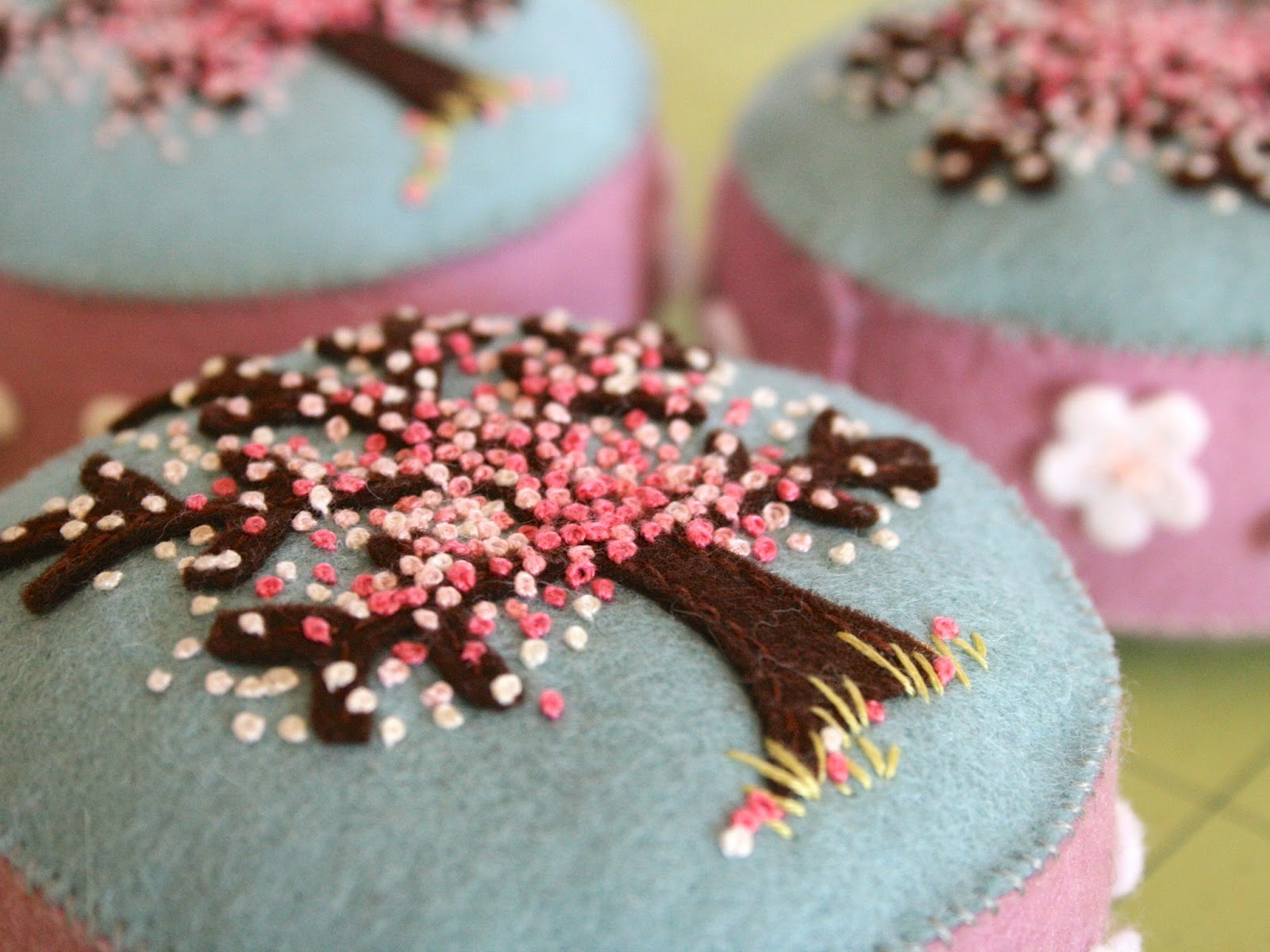 Some time ago I made a pincushion top with a Union Jack flag design.  I was never completely satisfied with it because it seemed that the felt didn't lie flat in the center when I curved the felt as it would be when stuffed, so I popped it in the draw where I store all my felt and forgot about it.  I came across it again this week and wondered what I could do with it.  Since the problem I had with it had to do with how the felt looked in the center of the design, I began to think about how I could add something there to hide the center.  I liked the idea of a rose and that led to the idea of the Tudor Rose, the flower that represents England. 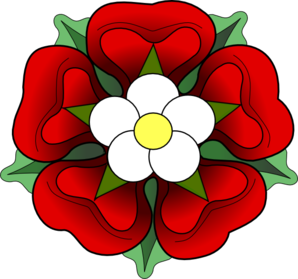 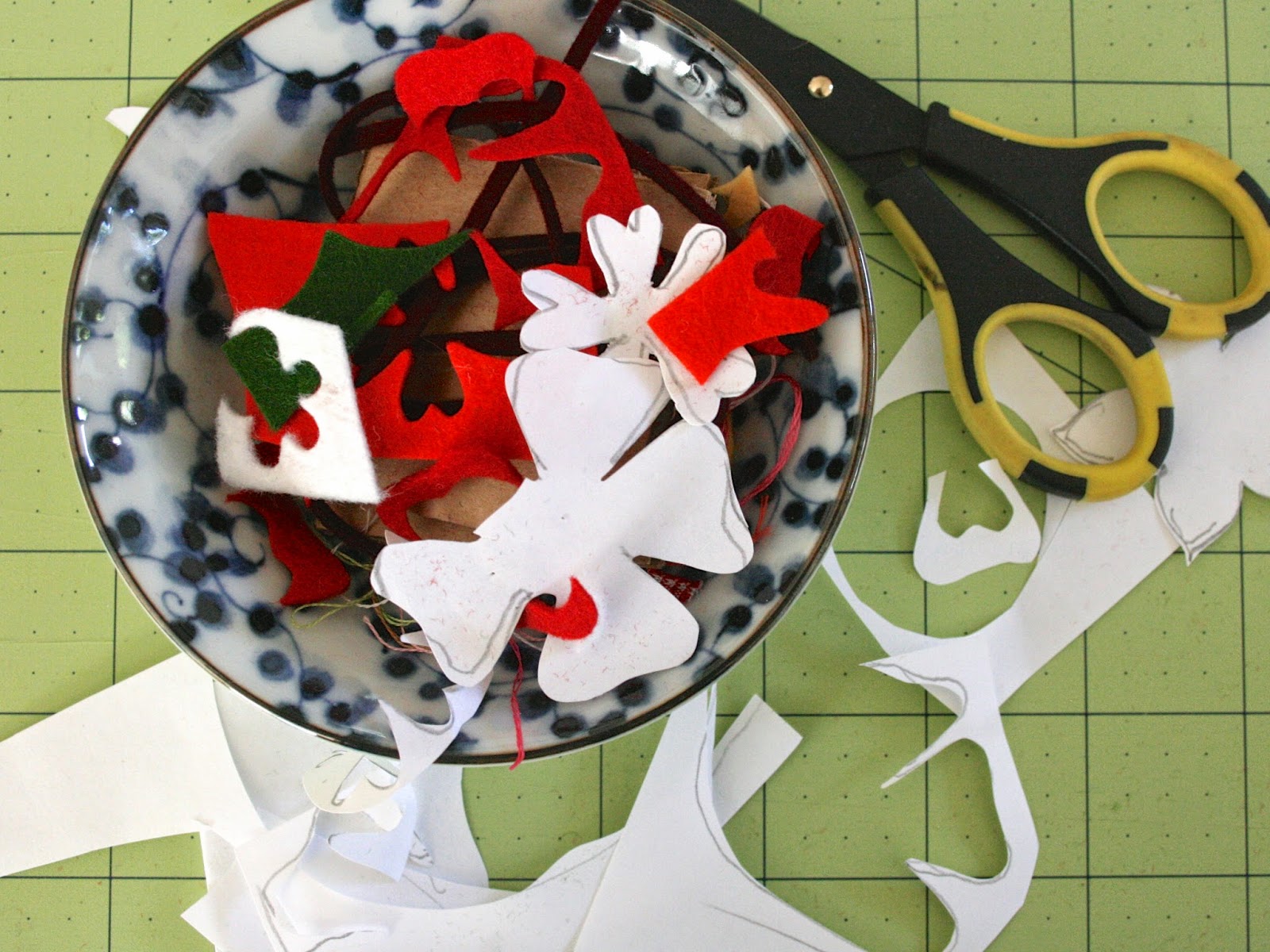 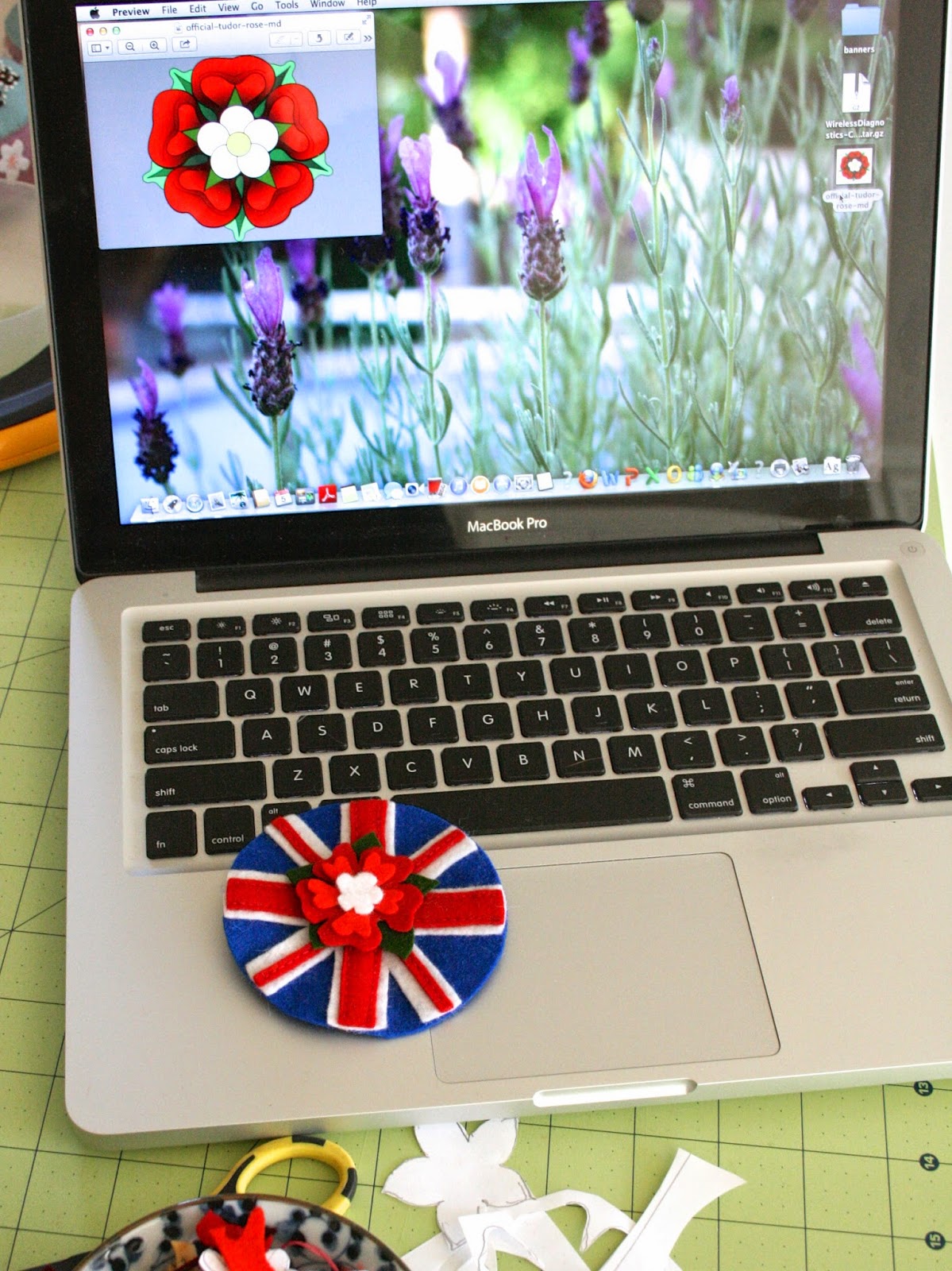 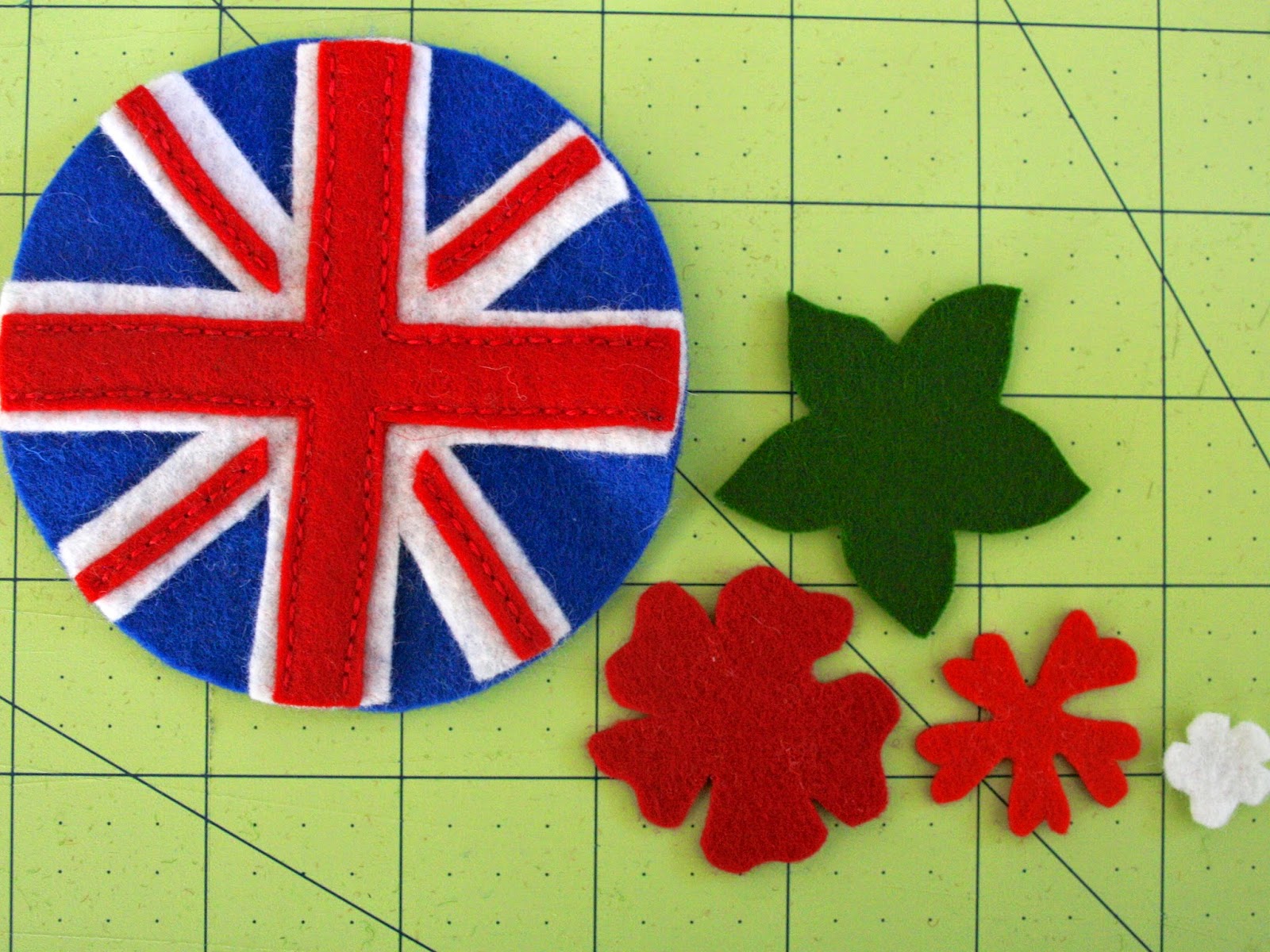 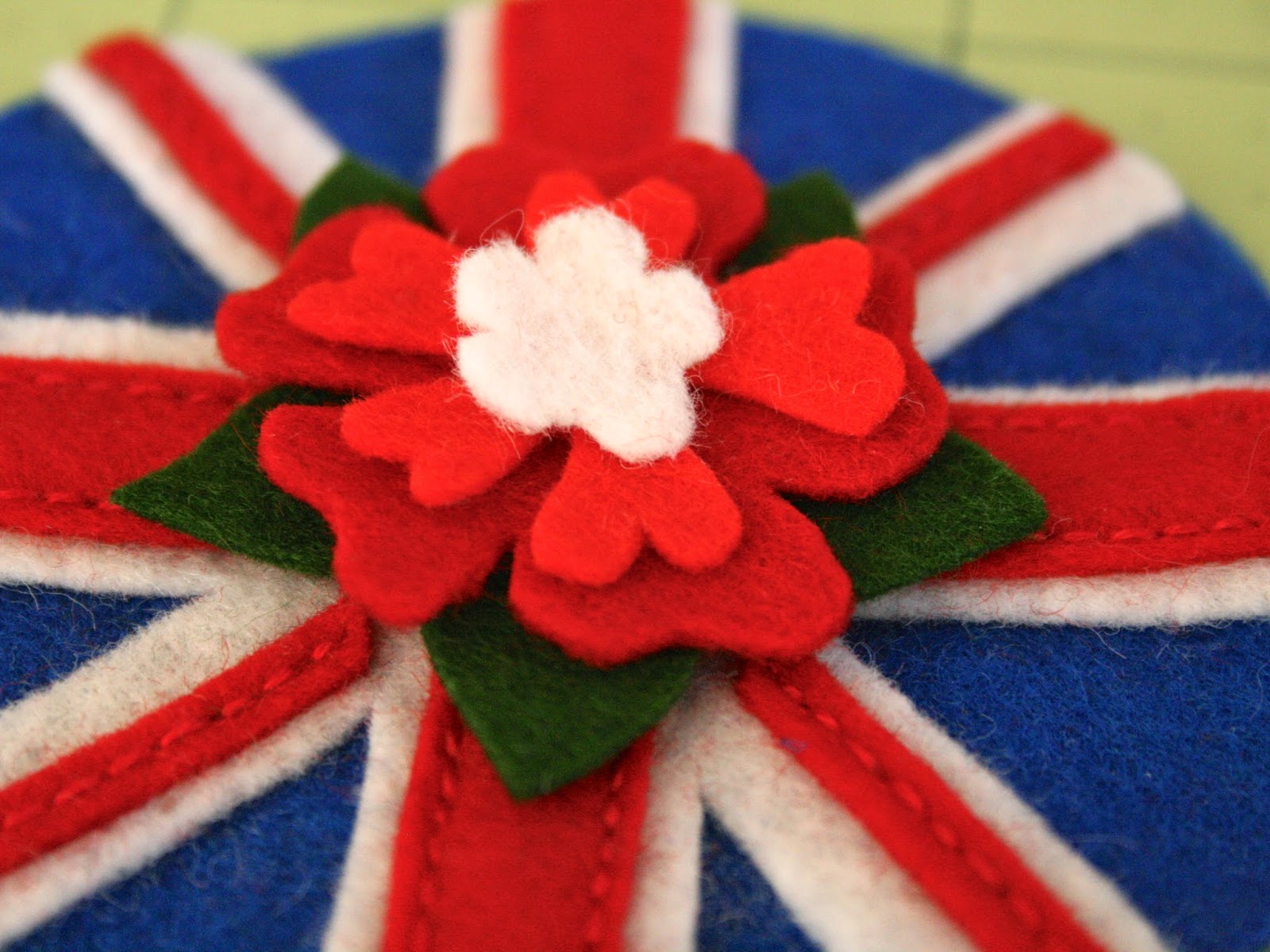 Around the sideband of the pincushion I embroidered "Oh, to be in England" which is from the poem by Robert Browning.

Oh, to be in England
Now that April 's there,
And whoever wakes in England
Sees, some morning, unaware,
That the lowest boughs and the brushwood sheaf
Round the elm-tree bole are in tiny leaf,
While the chaffinch sings on the orchard bough
In England—now!
And after April, when May follows,
And the whitethroat builds, and all the swallows!
Hark, where my blossom'd pear-tree in the hedge
Leans to the field and scatters on the clover
Blossoms and dewdrops—at the bent spray's edge—
That 's the wise thrush; he sings each song twice over,
Lest you should think he never could recapture
The first fine careless rapture!
And though the fields look rough with hoary dew,
All will be gay when noontide wakes anew
The buttercups, the little children's dower
—Far brighter than this gaudy melon-flower! 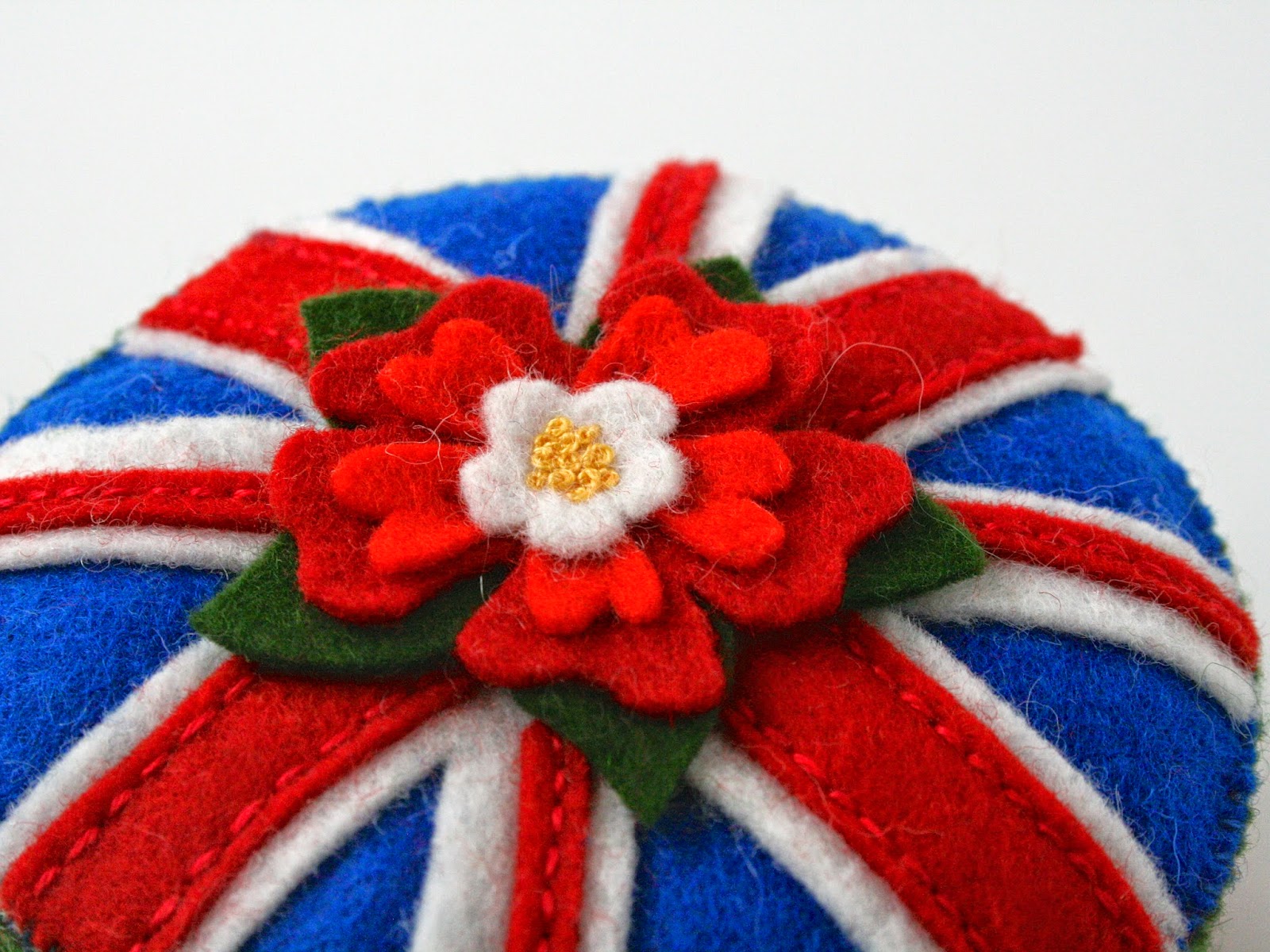 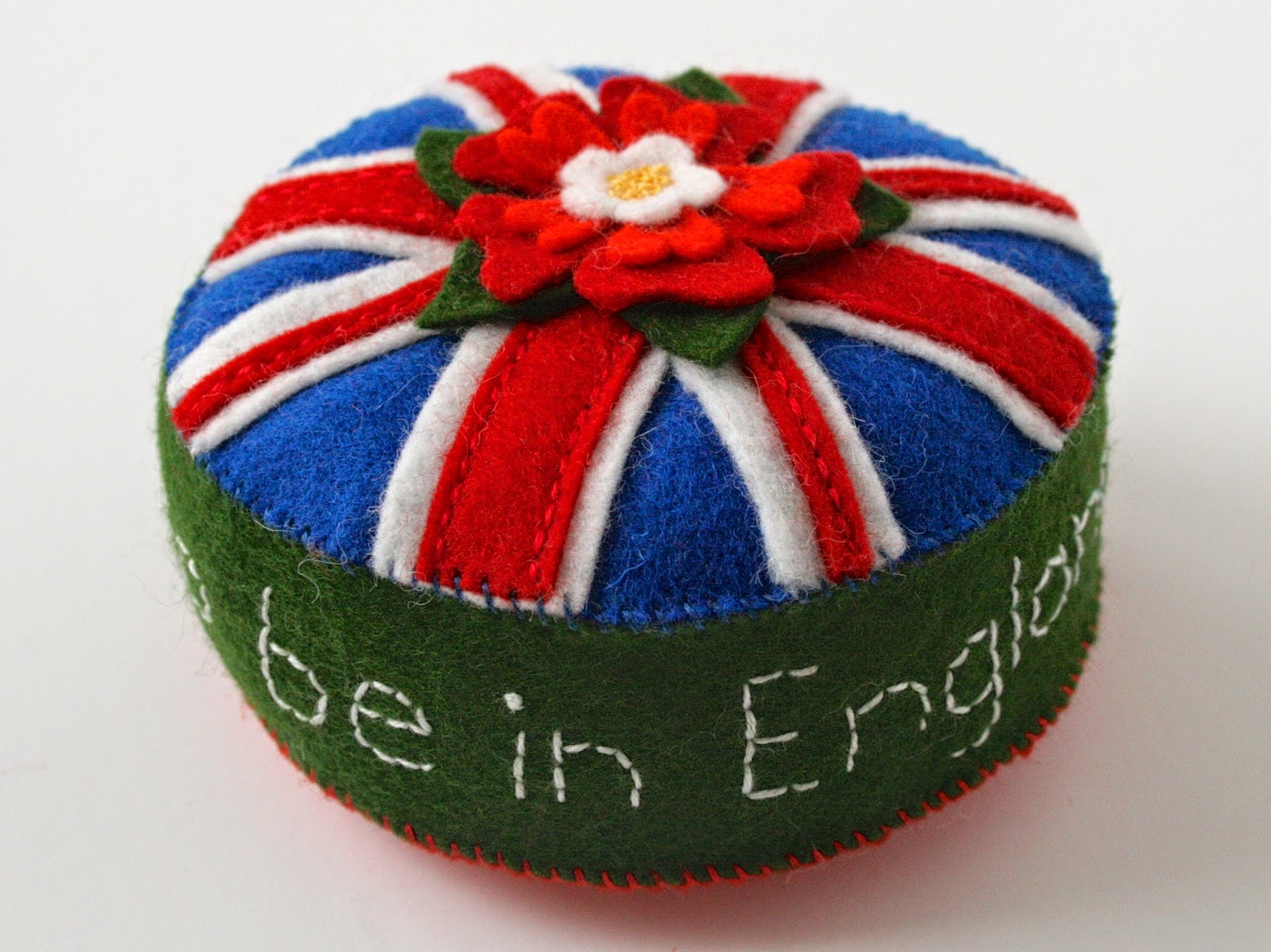 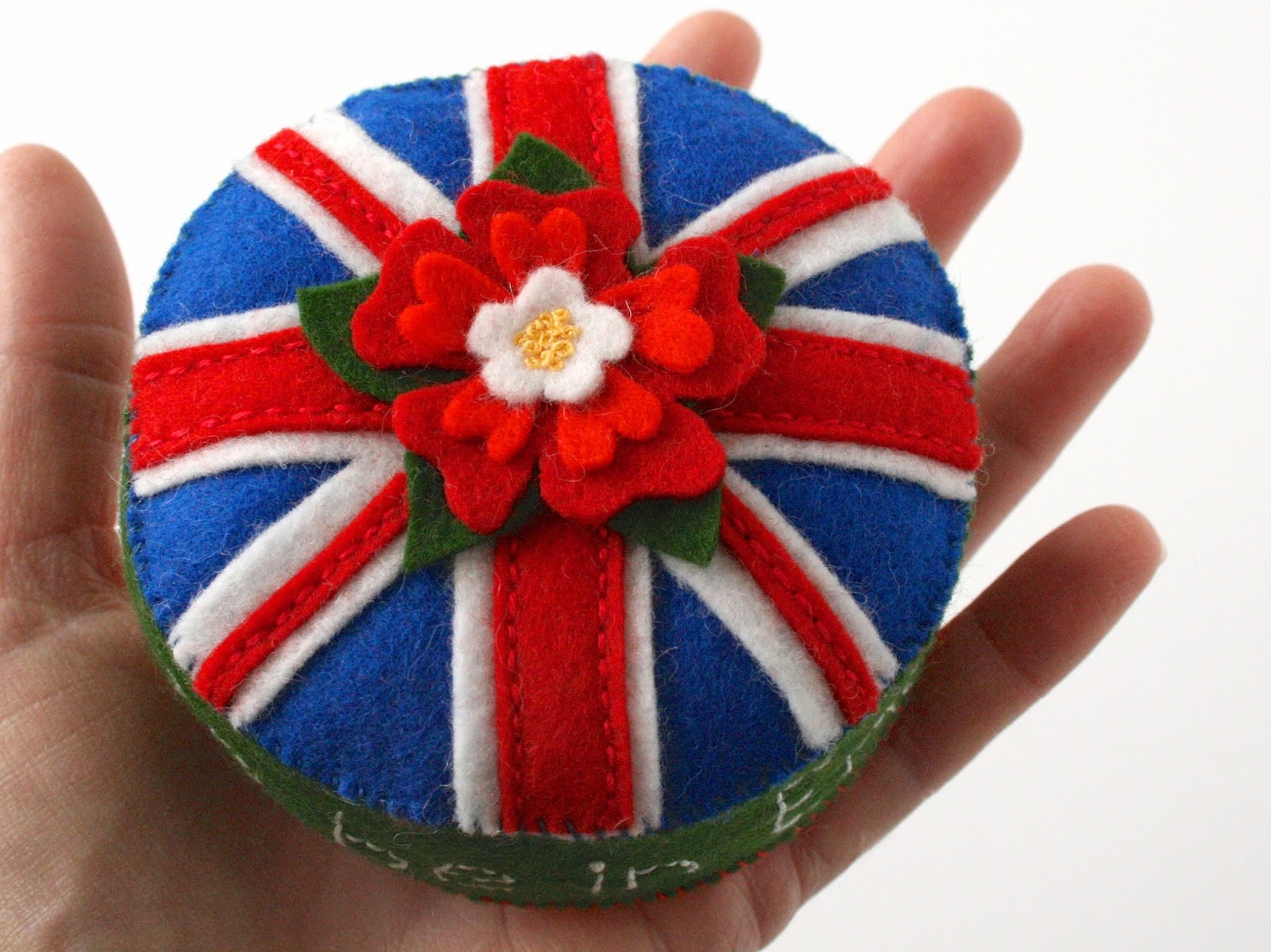 It seems like it was a week for finishing things up because I also finished two needlebooks with deer that, again, had been languishing in my felt drawer! 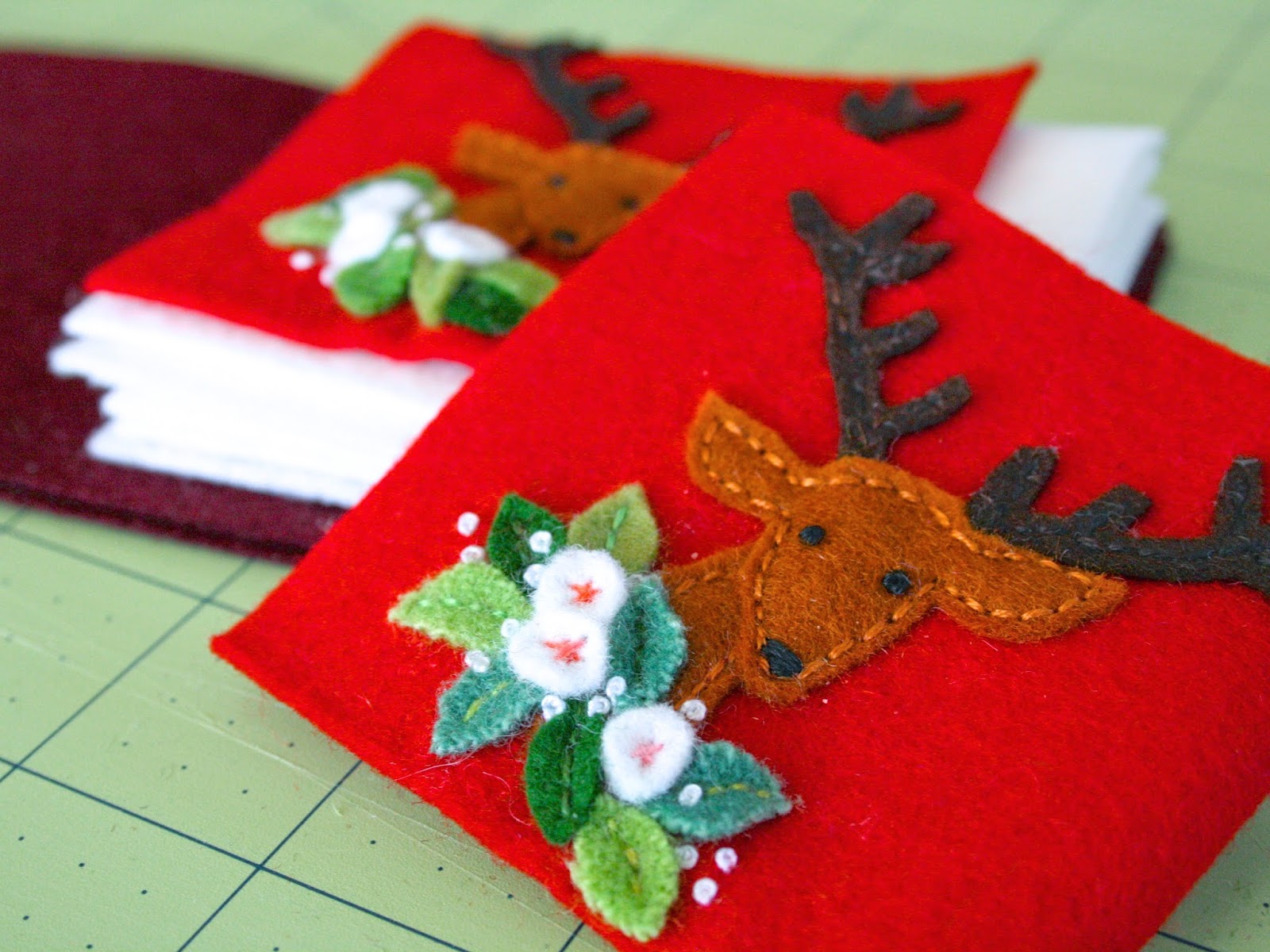 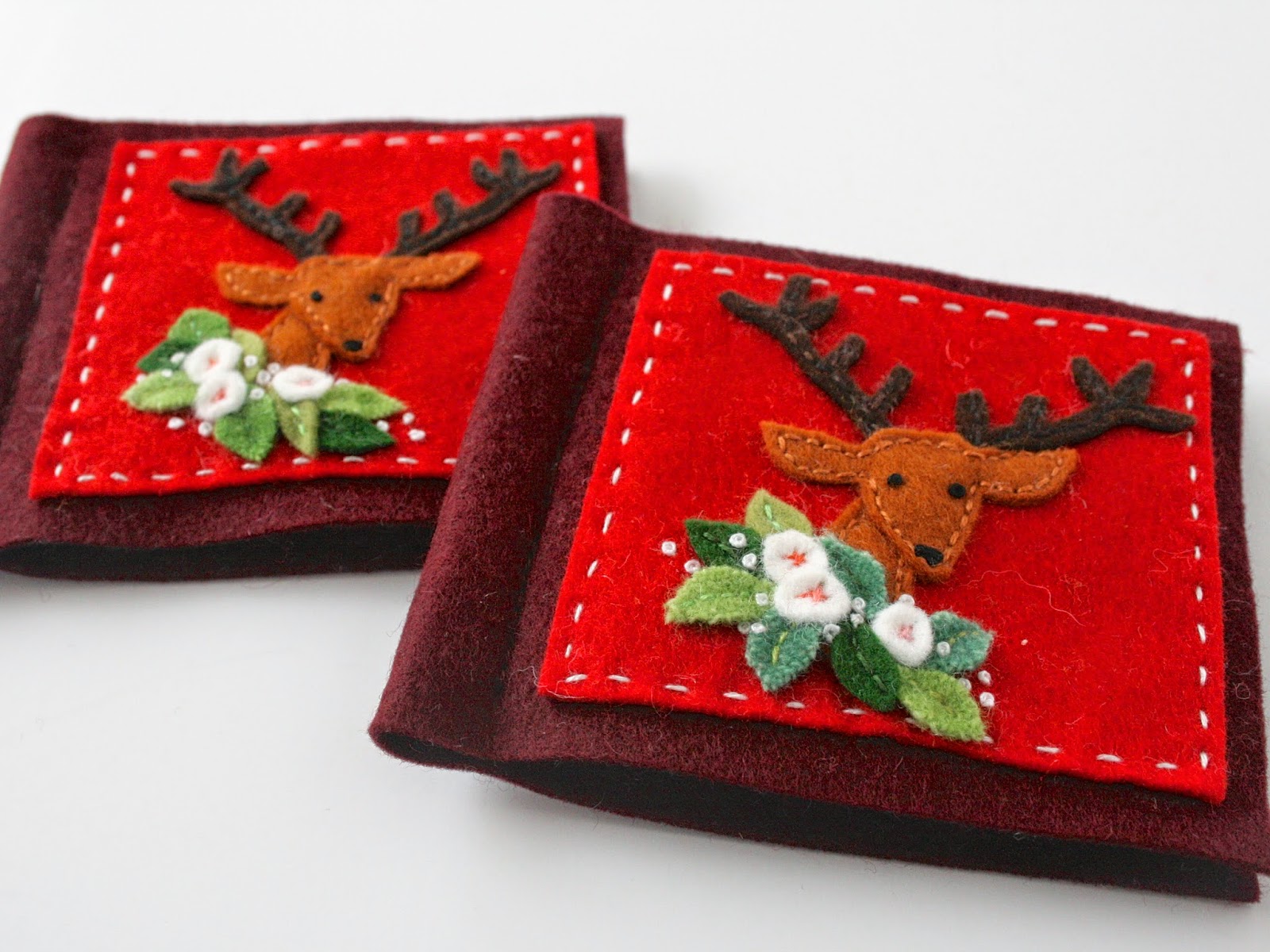